The Ever Evolving Rustic Kitchen

The kitchen has been evolving and morphing over the years, it started nearly six years ago as an old but waterproof caravan awning between my camper van and Trev's little caravan. That's all we had when we arrived, no shower, no toilet, no washing machine..... ok it's not like we weren't both used to roughing it in the past, but the challenges of two wet and cold winters in the mountains made the arrival of the 'luxuries' feels just that, incredibly luxurious.

So this summer the addition of the new kitchen has felt like another 'luxury' to me, we now have space to be creative with our meals, spices and herbs on shelves and everything having it's own place..aaah, happiness. The new solar powered fridge/ freezer and gas cooker with double oven is also a great pleasure for me. I have realised that as a host to so many volunteers and guests the value of a good kitchen is immense, it is the Heart (h), it offers us all joy and gratitude around the dinner table. I find that the volunteers and guests have become more productive, enjoying the autonomy of a functional space, separate to all our personal living spaces.
The vegetable garden is placed close by so that the eventual plan is to have a Farm to Fork arrangement. The kitchen composting system in close union with the garden, a symbiotic relationship.

The Round House Story

The story of the roundhouse really starts at the same time as the spontaneous, inspired (but also slightly crazy) decision to buy Quinta da Pomba, “ We can start a retreat centre here !” I say excitedly on walking around the land with Trev for the second time, the notion had just popped into my head, Trev said “yes I know how to make that happen, ” and I say “Ok then”. That was it really, the journey started there in the summer of 2013, myself and Trev had only met in May the same year.

Trev liked the idea of doing an eco construction, exploring different techniques to his previous building experience in Spain, and before that, in the UK. I was jumping in the deep end having no previous experience of building at all (although I had done a few eco contruction courses when working in the Steiner School). We received the planning permission for the straw bale round house in 2016 along with permisson to build another small strawbale house that is part of the long term plan. The original site that we had dreamed into was not actually where we were legally entitled to build, we had a very limited choice of sites due to various rules, which I won't go into now. Still we had always envisioned that it would be situated in the wooded area of the land and that is still the case.

The Round House for me is the hub or the heart of the retreat centre, it will be where we come together, whether it is for a workshop of yoga, dance, music, art or a shamanic ceremony. I hope it will be a place of celebration as well as opportunity for the local community to come together to discuss ideas, hear a talk or a watch a film together. Already we had my 50th birthday celebration in August which was great fun, the guests really 'inhabited' the areas, creating a sense of cohesion between our different zones such as the communal kitchen, dome, round house, camping grounds, the bathroom and the new swimming lake ! 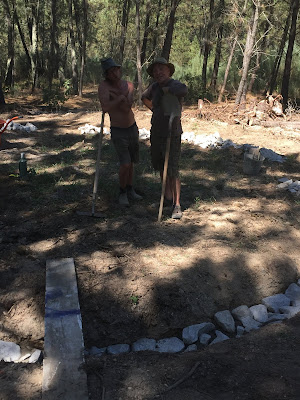 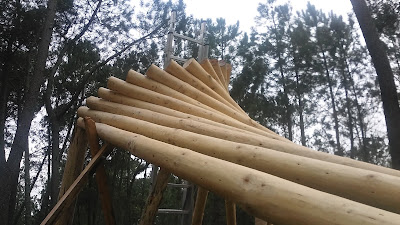 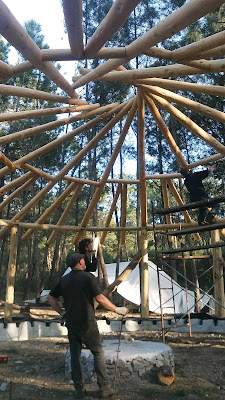 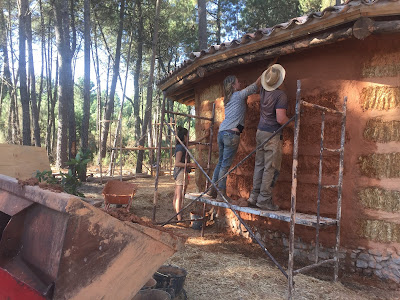 Earth and Stars
Hi my name is Jasmine, I live in the foothills of the Serra de Estrella mountains in North Portugal with my partner Trevor. We share a dream to provide a sanctuary to those who are open to allowing the Earth and her natural rhythms and cycles to nourish, support and ultimately heal us. We feel that humans are social beings that have, for eons, lived within community, supporting each other in physical activities as well as receiving inspiration in each others knowledge and gifts. Individually we found our way to Vale das Lobas, an eco village project, where we auspiciously met for the first time in May 2013. We have an exciting vision to create abundance on Earth through sharing of knowledge and skills within the loving framework of kindness and compassion.